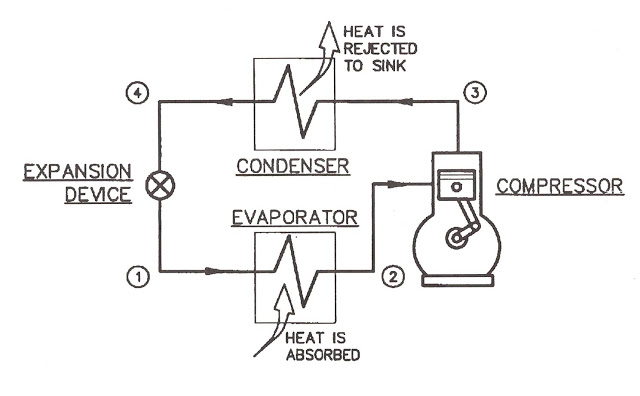 One of the most important things any HVAC/R student needs to learn is that an air conditioning unit does not create any cold air. This type of system works by getting rid of the heat in a specific space. A majority of refrigeration systems usually work by transferring heat all around, moving it from one designated area to another, therefore eventually cooling the desired section and reversing the conventional flow of heat by applying energy. The manner in which this entire process occurs often varies depending on the refrigeration system in use. Let’s take a look at the classification of refrigeration systems.

While most of these refrigeration systems have their similarities, they also have numerous differences. To stay ahead of the learning curve, we will break down every system below. Let’s get started.

The mechanical compression system is the most extensively used refrigeration cycle method. It has broad applications in both commercial and industrial refrigeration as well as air conditioning. Just as the name suggests, this kind of refrigeration system usually transfers heat by mechanically compressing its refrigerant into a cold, low-pressure liquid and then expanding it into a hot, high-pressure gas. Refrigerants are compounds with the capacity to boil at a wide range of temperature with the removal or application of pressure.

And similar to all liquids, refrigerants usually absorb heat when they boil into gases and release the heat when they are condensed back to a liquid. This refrigeration process usually involves moving a coolant from a low-pressure side of a closed system to a high-pressure side. At this point, the liquid refrigerant boils at about 40 degrees Fahrenheit on the low-pressure section and afterward absorbing heat from the relatively warm indoor air. On the high-pressure section of the refrigeration system, heat usually travels from the 110 degrees Fahrenheit vapor refrigerant to the cold outdoor air, and the cycle continues over and over.

For instance, most residential HVAC chillers mostly utilize ammonia as the primary refrigerant while water serves as an absorbent. This water is usually stored in a component referred to as the absorber where it siphons the ammonia in the low-pressure compartment of the system and gets rid of heat while also absorbing it. The water-ammonia solution is then sent by a pump to a generator which boils the mixture, thus separating the water from ammonia before the latter is sent to the high-pressure compartment. Besides the absorption process, heat is also used to facilitate the movement of the refrigerant through the refrigeration system. This heat can be derived from natural gas, steam, hot water and other fuel sources.

Contrary to the absorption refrigeration and mechanical-compression systems mentioned earlier, an evaporative cooling system does not use the conventional refrigeration cycle. Instead, these units which are often referred to as swamp coolers usually cool the warm indoor air by blowing it through some water-soaked pads before it gets into the inside of your home.

The water usually absorbs the heat from the air, and then it evaporates. The cool air is directed to the inside of your home while the warm air is sent to the outside. Evaporative cooling systems can minimize the air temperature by a significant value but are best suited for the dry climates, like in the southwestern United States where the weather is often dry. These refrigeration systems are also cheaper to install and utilize close to a quarter of the total energy used by central air conditioners.

A thermocouple is usually composed of two different metallic wires which are connected at both ends. An insulation is used to separate the other sections of the wire from each other. When a current is passed through the thermocouple, one of its ends becomes hot while the other remains cold. Reversing the direction of the current means that the hot and cold junctions will be swapped. The hot end is usually placed in the area that needs cooling with a heat sink attached to it so as to maintain a constant temperature around. The cold part of the thermocouple, which is often below room temperature, is placed in the section that needs cooling so as to attract heat from the air. This refrigeration system is applicable for small cooling loads which could be difficult to access, like electronic systems.

Fundamentals of the Gas Refrigeration Cycle

Just as vapor is often used for purposes of cooling in a vapor compression cycle as well as vapor absorption cycle, gas is used as the coolant in a gas refrigeration cycle. When this gas is throttled from high pressure to low pressure in the pushing valve, its temperature falls immediately with the enthalpy remaining constant. In such systems, rather than using ammonia and Freon as the primary refrigerant, the gas acts as the refrigerant. In the entire cycle, there is no phase change of this gas, which is commonly seen in liquid coolants. In this refrigeration cycle, air is the most frequently used gas, also referred to as the refrigerant.

Refrigeration is just a small section of the whole industry built around keeping your indoor environment comfortable, known as heating, ventilation, air conditioning, and refrigeration. An entire planet of science lies behind the manner in which refrigeration takes place to keep our world cooler.